Helped by this blog, an old friend of Nancy’s surfaced.  Her name is Amanda Trees, and she’s a musician, living in Brooklyn, N.Y.  It wasn’t this blog that Amanda first found, but rather a blog she once used to, of all things, locate people who knew Michael Jeffery (who was both Amanda’s and Jimi’s manager back in the day, and Nancy’s lover).  She also was motivated to counter the generally negative impressions that a good many people had of Michael J.  The other blog is called ReadySteadyGone and it ‘lives’ in the UK (such as it was, once united).

Unlike Nancy, who was romantically enmeshed with Mike, and unlike others with unspecified connections to him, Amanda found Jeffery to be charming, generous and caring.  She could see that comments about Mike on the blog-site were generally negative and felt many people just didn’t know and appreciate him the way she did.  Some people were even certain that Michael was the one responsible for Jimi Hendrix’ death.  But every connection we have with others is our lens through which we see them and form our impressions, and connections come in all colors, as I think everyone will agree.  Not saying there’s no objective reality, but just sayin the filters matter.  They may even add value.

Amanda was connected to Jimi too.  She sometimes came home to her apartment in Greenwich Village only to find Hendrix sitting on a sofa in the living room strumming his guitar.  Her mother, who knew him, apparently let him in.  Amanda’s mother, by her own account, was a loving, devoted, and evidently trusting, mom.

Filters…..where would we be without them?  Without filters, would the world appear to us just as it is?  Impossible idea, though enticing.  Poetry and art perhaps offer filters even life on life’s terms simply cannot:  an embrace.  Embrace life we are told; for Nancy, art has it’s own embrace!

Art has an embrace.
It’s not a train that just passes by you.
It’s not the style or the medium.
It’s not whether you like the artist or the work.
It if embraces you, it’s art.

Van Gogh wanted to be a musician because he felt that music surrounded you the way a canvas could not.
Jimi was trying to paint with music.
Zappa was being comedic with music.
Dean Koontz, the author, always mixes genres in his novels.  (i.e. Disney/horror)
It’s like holding your two index fingers apart and seeing an electrical current passing between the right and the left.
You can ride that connection.

No matter how noble the voices sound as they curl around your ears,
you must remember that you opened your own heart in your own way.

The only time I knew for sure I was in the right place at the right time, doing the right thing,
was when I was creating something I knew was right.

One dot of color could lay miles of picture into place.
Erasing something could make the sun come out.

One could say that Nancy wrapped herself in words.  She was a poet, a philosopher, and Jimi’s peer in both respects.  And while her “wrap” of choice was portraiture, her real medium was movement.

How you move is who you are.
What you look like is how people recognize you.
Drawing musicians was my way of watching people move, according to their own music.
I could hear, as well as see, who they were.

When you’ve never seen a person move, never seen them in conversation, laughing, smiling, questioning things, inspired,
delighted, bored, angry, confused — you can’t draw a picture of who they are.

I would initiate the whole process.  The study of the performers live, the preparation, then the finished work.
My work was mixed with my desire to ‘be there.’
It was where I wanted to be, and getting there was paradise.

After I finished the cover for “The Blues is Now,” I took it on a Lexington Ave. bus downtown.
I remember vividly that everything and everyone, every space and every solid,
was moving and entwined in the same design that the work that I was holding on my lap had come to be
after long hours, weeks, and sleepless nights that I had ‘been in love’ with it as I created it. 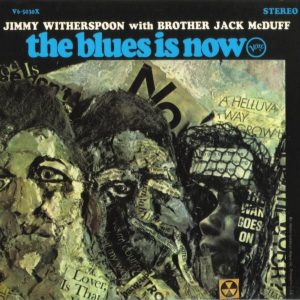 By the time I got off the bus, I was seeing normally again.

By Amanda’s own account, she and Nancy moved around ‘the hood’ (mostly Greenwich Village) playfully and often.  They rode bikes in the city, visited each others homes, laughed and cavorted like reciprocal muses in an ongoing dance.  Amanda recalls that her friend was constantly trying to help her — to stay creative, be strong, look capable, appear confident — although Nancy perhaps ironically was apt to see vulnerability and art go hand in hand:

Some great artists, the ones that we love, have ‘Help Me’ written all over their work.
Is the need any greater than that of others, or is their artistry their ability to exploit their vulnerability”

After meeting Amanda in Brooklyn recently, I have to say that either Nancy’s ‘help’ worked like a charm, or Amanda wasn’t ever quite the vulnerable young waif that Nancy needed to see her as.  In fact, Amanda’s gracious feelings about Michael (in contrast to Nancy’s sharp cynicism) pretty well reflect the kind of person Amanda is, and what makes her shine.  She isn’t one to fixate on people’s flaws, and her heart is wide open.  To me that indicates strength rather than weakness, courage more than fear.  When I met Amanda, she was wearing a navy wool overcoat with eagles on the buttons.  Nancy had given it to her reportedly with the aim, according to Amanda, of boosting her friend’s confidence!

Amanda also reported that one day, out of the blue, Nancy turned and said to her:

And by the way, my real name is Shaw.

3 Replies to “By the way, my real name is Shaw”