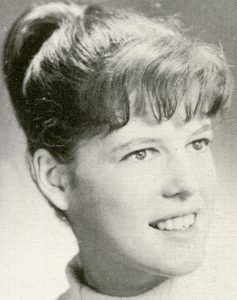 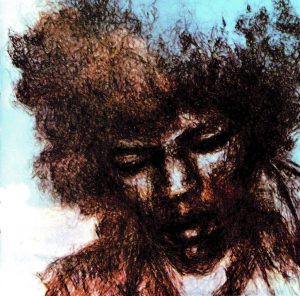 Nancy, my father’s first daughter, sketched Jimi Hendrix for his album, Cry of Love. It was, by all accounts, a labor of love.  Jimi was her good friend and confidant.  They wrote poetry together, traveled together, occasionally slept together, laughed and played together.  But at least according to how Nancy tells the story, which I will blog here for interested readers, a shared artistic vision was fundamental to their connection.  And as far as I can tell, both Nancy and Jimi depended on creative ways of seeing to lift them emotionally and spiritually out of the sink holes left by their respective childhoods.

I never met my father’s first wife, and I never met Nancy, my half-sister.  Growing up in New Jersey with my two siblings in a suburban Jewish middle class family, the whole matter of Dad’s first wife, including his first child, was quite off the table, unspeakable, out of reach.  Mom, Dad’s second wife, apparently wanted the whole affair to be invisible to us, perhaps to go away permanently, or at least fade from any recognizable reality.  And so it remained for the duration of our childhood.  We did have a dim awareness of our half-sibling’s existence, but our curiosity had no room to grow.

Then, suddenly, my father died of a heart attack (1971) while scuba diving in the Bahamas and his death put a pinhole in the family bubble of secrecy.  When my mother, a smoker most of her life, succumbed to lung cancer in 1985, relatively few obstacles stood in the way of our renewed interest in Dad’s first wife, and in our long lost half-sister.  We of course still faced the daunting challenge of uncovering secrets that had gathered a lot of dust over a great many years.  Yet we began to ask questions.

I don’t remember how we knew, but somehow we knew that Nancy was our half sibling’s name.  We had no other leads to speak of.  What little information we had back then we no doubt learned from my father’s sister, our Aunt Fran, who we were close to.  Fran had nothing positive to say about her brother’s first wife.  “She was as beautiful as she was a bitch,” I recall being told.  We also somehow knew that Nancy had gone to Brandeis University, and although we pursued that lead at one point, it went cold quickly.  We had no last name.  So for years we just quietly wondered where our half-sister was, and what she was up to.

Then one day in a café in San Francisco, a friend was telling me about his twin who was given up for adoption at birth, and whom he had therefore never met, until recently.  I was curious how he’d found his sibling.  “Believe it or not, someone on the internet helped me,” he said.  I thought of Nancy right away and asked if he would reveal his sources.  “Sure,” he said, “if I can trace back.  It was several years ago.”

Weeks later he called to share what he’d found.  It was a yahoo email address.  That was it.  There was no formal agency, no fee-for-service through an online source or otherwise.  He gave me the email address.  A response to our query came quickly.  The “adoption angel” was her online handle.  But for reasons that we couldn’t fathom, she emailed saying she generally didn’t take cases from New York or New Jersey (precisely where Dad and his first wife were from)!  She would, however, make an exception just this time.  She felt called to do so, also for reasons we couldn’t fathom.

We were able to provide very little, almost none of the background information she needed to get started and this caused my brother, sister and I, who were copied in all emails, to expect this lead to chill about as quickly as the Brandeis lead had many years before.  A week or so later, we emailed again and our adoption angel wrote back saying she had the information she needed, but now had a bevy of new questions.  Again, we were virtually of no help whatsoever.

Our yahoo angel wrote back a week or so later that she had found most of the answers she needed, but again she had more questions.  This time she also had some information that she thought might interest us.  She sent us, attached to an email, a digitized image of a ship log.  A boat (nothing like the monstrous cruise ships we’re familiar with today), the S.S. Santa Elena, had arrived in New York from the Bahamas on June 30th, 1939.  It had two passengers aboard named Ned Schwartz, 28 years old, and Arlene Schwartz, 19 years old.  My father and his first wife. 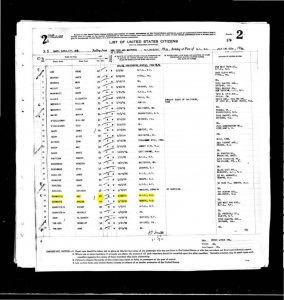 Speaking for all three sibs, I can safely say that at this juncture our passion to locate our half sister suddenly outflanked our simple curiosity about her.  Though we couldn’t imagine how she did it, our adoption angel seemed to be very adept.  The pattern continued — her managing to independently answer ninety percent of her own questions with barely any help from us.  Eventually, only about four or five weeks into the search, our angel shocked us by saying, “I have good news and I have bad news.”  Our bubbling spring of hope and desire quickly simmered.  “The good news is, I have found your sister.  The bad news is, she passed away just three months ago.”

Our hope collapsed inward and became a pool of sadness and grief.  Crestfallen, we thanked our adoption angel for all her hard work and prepared to sign off for good.  But she surprised us again.  “No, no, not yet.  I want you to know as much about Nancy as possible, albeit posthumously, and so I’m going to get you the names and phone numbers of some people who knew her.”  Keep in mind she was doing all this gratuitously, and we knew it, and felt immensely grateful.  For the next few months I was on the phone with a range of different people who knew Nancy:  her ex-husband, someone from high school in New York with whom she apparently had a very close friendship, a past headmaster at the private school she attended in Riverdale, NY, a neighbor-friend who lived in the same apartment building on the upper West Side of Manhattan.

From the neighbor-friend I learned of a writing project Nancy was working on and almost always always had tucked under her arm, at least through the 90s and well into the first decade of 2000.  I learned too that, according to the neighbor (and later supported by Nancy’s own writing), our half sister was a deeply wounded soul who had survived a very difficult childhood but not without significant emotional trauma.  She also died with virtually no money and was receiving assistance from the City of New York.  Our father’s apparent reluctance to acknowledge Nancy’s existence was among the main factors that made life very difficult for her…..not to mention my mother’s cold and rude dismissal one day when Nancy finally found her father and showed up at our door in southern New Jersey.  More about this later.

It would be an understatement to say that Nancy had, as I later confirmed, found refuge in her art and creativity.

I hadn’t expected to experience tears of grief for a sibling I never met, and so it surprised me when I actually cried with abandon.  I won’t speak for my brother and sister, whose curiosity about Nancy I do know we shared.  But grief is very private and even when our parents passed, I couldn’t say how my siblings experienced the loss.  I worry about my brother, who to this day says very little about the deep sea diving trip he was on in the Bahamas when Dad had his heart attack.  As for Nancy, the tears and shock over her passing were real but brief for me, leaving room for curiosity to rise again and hold sway.

Her own curiosity must’ve prompted even our adoption angel eventually to ask us, “Why do you think a woman with the same name as your sister might have been selling artifacts online that were alleged to have belonged to Jimi Hendrix?  In fact, sometimes this woman is selling the objects, but more often she is the signer of the LOAs (“letters of authenticity,” which authenticated the connection between the objects and Hendrix).  By this time we were used to being stumped by questions from our yahoo angel, but this query was of a different ilk.  The question itself generated a whole new tidal wave of curiosity.  Long story short, we soon learned definitively of Nancy’s intimate friendship with Jimi Hendrix.  The connection has been confirmed repeatedly by numerous sources, not only by Steve Roby, a Hendrix biographer, but also and most strikingly by her own lyrical descriptions of times she spent with Jimi and his friends and other fellow musicians.

With Jimi in London, with Jimi at his trial in Toronto, with him in his studio when young groupie girls showed up, with him at the Monterey Pop Festival, in a car with him on the Pacific Coast Highway, and with Jimi in an apartment on the Upper West Side where she sketched the drawing that later became the cover of his acclaimed Cry of Love album.

But why not with Jimi and with us, her half-siblings?!  Oh how I wish Nancy had been able to write proudly of the family she found (or that found her) when she least expected it, most longed for it, and had given up trying to find it.  And even moreso, how I wish she could have written about the opportunity to bring her newfound family together with her favorite celebrity friend.  She would have written about Jimi Hendrix and us!

That thought always hijacks my reasons for wanting to share this story.  Even now.  I say that because the REAL reason for this blog is to get out to the world Nancy’s writing and to complete the task she apparently intended to finish herself.  Nancy is a far better writer than I am.  Readers I think will smile and probably laugh out loud, when they aren’t being moved to tears by what she shares and how she expresses herself.

Yes, my sister saw Hendrix through adoring eyes, but she cast him in a very human light that alternated between admiration for his gifts, and criticism of his human weaknesses.  In fact Nancy, as readers of her poetic narratives I think will find, always looked for eye-opening contrasts in the worlds she inhabited, and brought these to light in her writing and in her art.  It’s one thing that makes her writing so much fun to read.  Innocence mixed with cynicism, buoyant humor mixed with leaden truth, soaring vision mixed with anchored awareness.

The truth is, Nancy’s art and personality, not Jimi’s, is what motivates me to share this story.  Nancy was blood, albeit a severed limb of the family.  And though she was wounded, and longed for the family she never had, she was also a brilliant artist and poet.  I can hardly fathom how she managed to preserve her innocence.  But she did, and her writing (all done by hand on blank white pieces of paper) bears this out.  But you be the judge, please, and feel free to share with others who you think may be interested.