Nancy was an artist above all else.  Her father, the New Jersey eye surgeon, who was also my father, was mostly about science rather than art.  But life for Nancy was more energetic than cellular.  Art dissembled her logical fallacies and opened her to truth.  Like the drugs she/we took in the 60s, it widened the range of her perceptions and exposed hidden frequencies.  It had unmistakable power for her.  Artists, she believed, were different from the rest of us.  A kernel of sand in their core was enough to destabilize the prosaic logic of ordinary perception and tilt their minds to register the extraordinary.

The rich learn to expect different results from life.  Quicker service, better goods, more choices, easier access.  But they are the same inside [as the rest of us].  However, artists are different from other people.  There is something inside, like a grain of sand.

Picasso’s Guernica was covered at the U.N. when Colin Powell spoke in favor of the war on Iraq.  How much power did they think that art had?  If a painting could make a warrior feel uncomfortable, what could the painter do?

Yes, Nancy was alive when Powell spoke at the U.N.!  That was Feb. 5, 2003.  And clearly it was offensive to her that the pain of war, perhaps any pain, should ever be hidden.

Art could be addictive:

You start off so grounded in everyday life, that the creative ‘lift-off’ is a release – a free exhilaration and pattern, new and enjoyable.  You end up so ‘out there’ that you cling to the instruments you use (paint, guitars, paper, stone, words, voice, etc.) for grounding and stability.

For Nancy, artists had an ability to see reality morph from one energy field to another:

It’s like holding your two index fingers apart and seeing an electrical current passing between the right and the left.  That’s what makes 3D.  Life.  360 degrees.

You know how you had to open your heart, and focus your senses…
To create the beauty you envisioned…
No one else can chip away at your engineering.  It holds you up.  Whether or not it seems logical or valid to anyone else, they cannot pull it out from under you.
No matter how ‘noble’ the voices sound as they curl around your ears, you must remember that you opened your own heart in your own way.

It seemed to me that the only thing that was really mine was my ability to draw.
It didn’t depend upon the grace of anybody else.

Art is wholistic, at times holographic:

One dot of color could lay miles of picture into place.
Erasing something could make the sun come out.
These nano-particles of thought can wake us up at night.
And push the whole rest of the world away

Art is being vulnerable:

Some great artists, the ones that we love, have ‘Help me’ written all over their work
Is the need any greater than that of others?
Or is the artistry of some people the ability to exploit their vulnerability? 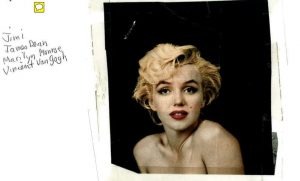 Artists, as Nancy was aware, don’t know why they never seem to have enough “cents”

I think (brace yourselves) that Howard Stern is the only true artist today, who also has his eye on the bottom line.  I wish he’d write a book about it.  I’d love to learn.