‘I think of him rather like Genghis Khan,’ Mike said to me on several occasions.

And he was referring to Jimi.

I couldn’t understand why Mike was comparing Jimi to a warrior.  Since I never asked, I’ll never know.

But recently, a book about Genghis Khan illuminated another facet of his persona.  It said that he was an architect of a new way of life at a pivotal time in history.

It said that he unleashed an explosion of civilization.

It said that he was a visionary leader, joining backwards cultures with flourishing cultures.

What might Nancy have had in mind?  Backwards cultures joined with flourishing cultures?

We ask for too much.  We just dig too deep and hit something that breaks.

It scares me when I hear ‘buy and sell for me….’

It’s the trapdoor through which fools fall.

You orbit around that concept backwards, your ear listening for tumblers so you can be sucked out by the skull.

I once told someone Jimi reminded me of my mother.  Now I understand.

That unreasonable focus that can’t help itself.

It’s like ‘live and die for me’ which is how my mother made others feel.

Words have never been adequate to describe pain, though they may be necessary at times when help is sought.  But pain is frequently around when two world are joined or collide, especially when violence is part of the process.

Jimi understood that pain, about which there are no words.

Hendrix’ rendition of the Star Spangled Banner (especially at Woodstock) would make any words whimper next to his virtuoso guitar. And so Nancy included on a page in her diary, an image of the painting by Picasso, who also never needed words to describe emotion: 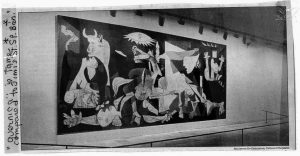 And below is a part of Jimi’s Woodstock performance of the Star Spangled Banner.  As one Lilia Garcia comments:

For those of you who think he is just freestyling or just making unnecessary “noise” he’s actually symbolizing war time. If you actually listen, he imitates bombs being thrown and exploding, guns being shot, chiaos, and innocent people screaming in terror and dieing, (hence taps being played after awhile).