This post is a sharp turn from the most recent posts on this blog, which have mostly described, in Nancy’s own words, the pain of growing up with no father and a mother who abused her.  Sorry if this disrupts any sense of flow.  I suspect it won’t.

Nancy, as this blog will later describe in more detail, and in her own words, eventually finds Jimi Hendrix when she is in her early twenties.  Thus opens a whole new world of art and personality, color and form, friendship, music and perhaps a little madness.  She finds home in a place inside her that the artist…..and she discovered her quite early in life….never really left.

My thoughts, which I kept to myself, were odd for then, but in style today.

I wanted to, but didn’t, wear my hair sticking straight up, like what is now called a modified mohawk.

I thought that cotton candy pink hair would suit my personality perfectly. But of course I had none of today’s many products to validate what I thought were very creative ideas.

After Jimi died, she was evidently called upon to provide LOAs, “letters of authentication,” that verified the authenticity of things that belonged to Jimi (and also Janis Joplin as it turns out!) that were being sold at auction.  She must’ve made a little money doing this.  And money she needed, since she profited little from whatever she created, including her sketch of Jimi for Cry of Love, which was apparently bought by the Hard Rock Cafe.  When she died, she was virtually destitute.  The City of New York had to come in and clean out her apartment.  No next of kin came forward (we still hadn’t found her).

In 1970, there were apparently some photographs of Jimi Hendrix being sold at auction.  In her LOA, Nancy Reiner states,

these photographs were used as preliminary models for the drawing I did of Jimi for the ‘Cry of Love’ album cover. There are paint markings on several of them – from my art studio.  Jimi was a friend with whom I would draw and write on many occasions.

While three of the 11 x 14″ photos are in very good condition with corner/border wear, five exhibit varying degrees of creases, wrinkles, and paint stains…

I haven’t been able to find these photos, but other objects once owned by Jimi Hendrix and Janis Joplin — a bracelet (Jimi), a hat pin (Jimi), a purple agate ring (Jimi), a scarf (Jimi), and a beanie hat (Janis) — were authenticated by my sister Nancy Reiner so they could be sold at auction.  These are shown below. 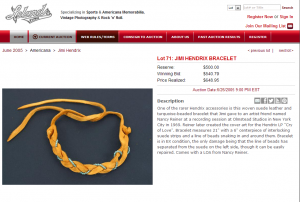 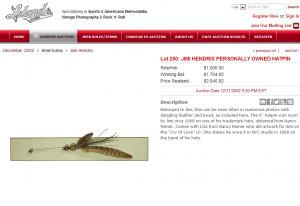 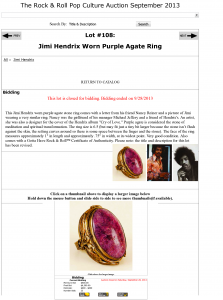 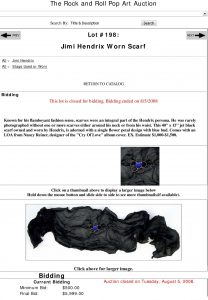 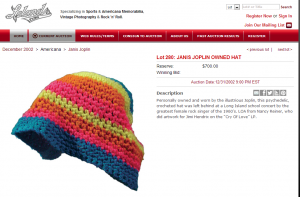 4 Replies to “LOAs for Jimi Hendrix and Janis Joplin”