Imagination is a life force not unlike procreation.  It’s hard not to recognize (see The Background Story) how adept Nancy was at contrasting incompatibles and producing novelties in her writing, in her artwork, and in her life.  It was a labor of love for her, and grew out of her lived experience as a child of privilege and abuse.

Her friendship with Jimi was a novel, if not alchemical, transmutation of base elements into a valuable tapestry.  At the very least, their relationship was a study in contrasts.  She was a rubenesque Jewish redhead from New York city once married to a department store heir.  He was a lean, African-American boy from a fractured family on the west coast who chose to be a paratrooper in the U.S. army rather than go to prison.  Both were children of broken homes, and both used their art and creativity to lift them out of deep-rooted despair.  They must’ve recognized this in each other.

Nancy and Jimi no doubt grew together.  They wrote poetry together.  Simply put, they enjoyed each other’s company.  I can’t speak for Jimi, but it is quite clear that Nancy found happiness when she spent time with Jimi, that is, most of the time. 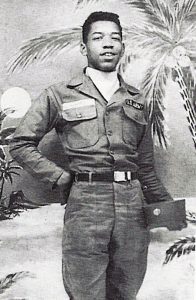 Nancy on a beach with a friend from high school.

I never felt like a free-wheeling youth once the scars [of childhood] began to appear.

Sweet little tinkerbell hippies were handing flowers out to the cops.

John Phillips, of the Mamas and Papas walked around in a big fur hat.

Nico and Brian Jones strolled along under bangs looking beautiful.

And as Jimi and I lolled on the grass like two kids on a campus lawn, it felt like recess.

As an artist, and as a friend, Jimi channeled magic into Nancy’s lived experience.

from ear to ear,

the way a child plays

from hand to hand.

Jimi was a paratrooper at one point.

But maybe the dynamic remained.

The chute opening was the difference between life and death.

The leaps were always paramount.

Having to perform on level ground required no leap of faith.

For a poetic view of the importance of leaping, see W.H. Auden Leap Before You Look. Even on level ground, Hendrix leaped naturally, making the effort of reaching unnecessary.

He seemed to naturally extend.

He had a speaking voice like bedroom slippers walking over a plush carpet.

Jimi was magic for Nancy ….. yes….. except when he WASN’T, like when he was just another rock and roller sowing his oats, and especially when Nancy herself, to her shock and surprise, was recruited to be meat for the grill (See Hendrix’ groupie experiences).  And so Nancy didn’t always see Jimi as emanations of “fractal light.”  When she witnessed group (groupie) sex in the bathroom of Hendrix’ recording studio, Nancy reflects:

I felt like I had just watched van Gogh cut off his ear.