That Nancy was an artist first and foremost sunk in slowly for me.  Once I’d had a chance to digest the fact that she and Jimi Hendrix were good buds, that she both loved and hated his general manager Mike Jeffery (more about this later), that she had met and befriended many of my rock star heroes like Richie Havens and Johnny Winter, that she was the daughter of my father’s first wife whose cruelty and neglect scarred Nancy for life, that she lived in New York only a short drive from us, and that we failed in the end to find Nancy and get to know her while she was still alive….once all this sunk in…..I was ready to see Nancy as probably she would have most liked to have been seen.

I first understood that Nancy was an artist before all else, and cruised through life in the wake of her own creative process, when I finally sat down and read the notes she left behind.  As I turned each handwritten page, her humor tickled, her sorrow stirred, and her insights raised my eyebrows.  I was inspired by her spiritual resources and amazed by her rebound out of what was evidently an extremely emotionally bereft childhood. I haven’t yet shared much of Nancy’s artful prose in this blog, and I am now gearing up to the task.  The hardest part is deciding where to begin.

Nancy managed to lace sadness with humor, a style reminiscent of others like Woody Allen, but without the self-deprecation.  For Nancy, humor and sorrow were based less on her self-image and how she wanted others to view her, and more on how it seemed to her the world worked, like it or not.   For example, Nancy sorely missed having a functional family she could turn to regularly, not just a Dad, but also a mother that wasn’t abusive, and an extended family that wasn’t emotionally disappointing.  The in-laws she inherited from her short-lived marriage were just that, emotionally very disappointing (more about this later too).  So when someone she calls a “relative” (in her notes) seems to reach out to her, it only fans the flames of her longing:

A relative called me once and said, You’re not alone.  You have a big family.

Can we get together? I asked.

Oh no, she said. We’ve got our families and our lives and our work and we’re very busy.  We just wanted you to know you had a family and weren’t alone.

Like the dollar bill on the string that you think you find on the sidewalk … and then the jokester pulls it away as you reach for it.

I don’t have a clue who that “relative” may have been, although Nancy reports being a cousin, through Harold Russek, of the famous photographer of the marginalized, Diane Airbus. Harold Russek was Nancy’s mother’s 2nd husband.  There were more to follow.

In any case, the character of the jokester in Nancy’s story is more familiar.  Actually, “trickster” would be a better term (though by no means perfect).  Tricksters are found in the myths of many different cultures (Wikipedia says this:  “All cultures have tales of the Trickster, a crafty creature who uses cunning to get food, steal precious possessions, or simply cause mischief.”)

In a sense my own Dad/Nancy’s Dad played the role of the trickster when he married, conceived Nancy and quickly divorced Arlene, Nancy’s mother.  Arlene was herself a trickster in her capacity as Mom to mete out some very punishing love, if you want to call it that, and although her narcissism wasn’t funny to anyone I know, it’s conceivable that it might be found funny by some.

Nancy’s lover, Mike Jeffery (Hendrix’ general manager), was a trickster in his feigning of romance and in his lame attempts to mask his infidelity.  Nancy’s ex-husband and his family played the role of trickster by faking the follow through after their marriage and not welcoming Nancy as a new member of the family.  Alone, Jimi stands out for his un-tricksterlike treatment of Nancy.  But more about all this in posts to follow.

I have decided to devote this post to what Nancy felt and knew about arguably the number 1 trickster in her life, DAD.

Keep in mind that we’re talking about the middle part of the 20th century.  Even when the Summer of Love blossomed in San Francisco’s Haight Ashbury neighborhood in the late 60s’, I was barely a teenager (My younger brother by three years was into Jimi Hendrix quite some time before me, while I continued to  worship the Temptations, Martha and the Vandellas, the Four Tops.)  The hippie ethos of peace, love and brotherhood was just beginning to unfurl, like the flag of a newly established tribe.  We lived far from the tribe’s vibrant core in San Francisco.

Dad was an eye surgeon in Philly with an office in Camden, N.J.  I was the only one in my high school class I think who knew how to spell “ophthalmologist,” and I knew it.  I felt entitled.  Still, the communitas and culture of equality that characterized hippiedom wasn’t a stretch for me and I happily embraced it.  I grew my hair.  Quite arguably, Donald Trump may still have been young and innocent at the time.

It wasn’t until Nancy was sixteen that her mother revealed to her who her true father was:

There was a man in New Jersey who was a doctor and had four children and by the way, including me, he had five.*  [*Nancy was wrong about this…at least as far as I know….he had three children, four including her.]

My mother decided to tell me, when I was sixteen, that Harold Russek wasn’t my father.

My mother never had a nice thing to say about anybody, including Harold Russek, so I was never really sure about who he was.  I didn’t know him, but when I saw him I called him “Daddy.”

There was a picture in a box, of me in my hospital nursery crib the day I was born.  My mother took it out and spit on it, and then rubbed off the ink that said “Baby Girl Russek” to reveal the name “Baby Girl Shaw.”

I wrote to (Dr. Shaw) and asked him if he’d like to have lunch with me.

He wrote back and told me that it would “disrupt” his life.  He signed it “Ned.”

One day my mother told me I had “Ned’s feet.”

You can’t have everything!

Nancy at another time wrote:

I almost found my father.  [I guess she means here that she almost met him.]

Were you his first born? Barbara’s father asked.

The word, “first born” filled me up with a sacredness I had never felt before.  The potential of my “holiness” in my father’s lineage flew through me like a missed blessing.

I was at a Thanksgiving dinner at Barbara and Danny’s house in Philly.  Danny had written a book called Finding our Fathers, about Jewish genealogy.  We had known each other since seventh grade.

Barbara’s dad was an ophthalmologist and at dinner that night he told me he had known my father.

He would have tried to arrange for me to meet my father if he could have.  But he couldn’t.  My father had already passed away (1972).

My emotions were stirred, as was my sense of the poetry of life.

On a single sheet of white paper, the words Nancy hand-wrote always bring tears to my eyes whenever I re-read them:

I wonder if my father would have touched my face.

Or softened his eyes,

with some kind of love.

And on yet another very blank sheet of white paper, at the top as if in a headline, she simply writes:

I don’t want to disrupt my life. 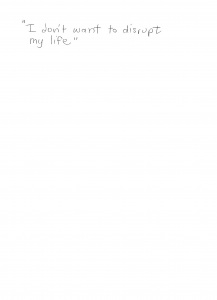 I never met Stephen King.  Just seen him in an interview.

‘Father’ was brought up.  The one he never knew.

It was like someone had cut his strings.  He slumped sideways and closed his eyes.

We met at this moment, blindsided by an emptiness, indescribable and deep.

It’s a darkness where someone should be.

One Reply to “Dad”