When Nancy first met Frank Zappa, she saw him as a man of many personas:

I don’t think it showed on the outside, but inside of me, when I first saw Frank Zappa, I did a double-take, worthy of a cartoon!  I’m not exactly sure why.  It was as if a cartoon ghost rose from him and went Boo!!

My head spun around, my eyeballs popped out, and my neck was on a slinky.  I must have adjusted pretty quickly cause after I introduced myself I asked if I could draw him, he said ‘sure’.

The drawing I did, for some reason, came out exactly like he looked.  And he looked quite normal to me by then. 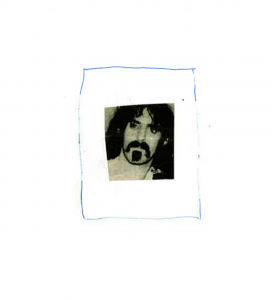 Zappa’s softness and gentleness alternated positions with his growing persona in so many ways over the years.  He was the kind of guy who if you casually asked him where he was gonna be later would start to answer and then stop and say, ‘hey….I don’t owe you any explanations.’  I kept seeing him change from one phase to another, almost imperceptibly.  Maybe he had not yet perfected his persona.

When I first laid eyes on him — which is what this picture is about — he was sitting quietly in the MGM tape room, taking notes on the final mix of Freak Out.  In reality, he was very quiet and polite and we both listened to his music while I drew his picture and he took notes.  It was the first time I had heard Freak Out, and I loved it.  At some point I said to him

And he said ‘Listen to the music.  The music can be funny too.’

I had just finished illustrating an album cover for Eric Burdon and the Animals and Eric, at that time, did not write songs.  He covered other people’s songs and Tom Wilson, his producer, often had to help him with the phrasing, etc..

Tom Wilson was Zappa’s producer too but it became clear to me that Zappa was in total control of his production, all the way out to the album covers and advertisements.

When the Mothers played around New York City during the winter of 1966, Gail and Frank (before they were married) used to sit on the empty dance floor of concert halls in between shows and kiss and hug like little teenagers.  Then Zappa would get up on stage and lead the Mothers of Invention like an ancient philosopher, a mad scientist, a comedian with a dead pan delivery, a classical artist, a halloween pumpkin, a quiet guy……who couldn’t resist saying BOO!

He invited me to join him and a bunch of other people for a big dinner of grape leaves, hummus, pita, tahini, tabouli, falafel, feta cheese, and all sorts of other Middle Eastern delights on 30th St., across from the Martha Washington Hotel. (Don’t ask me why these details stick in my mind.)

It was a lovely night.